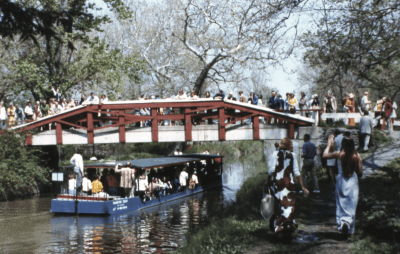 The barge left New Hope and headed upstream at three in the afternoon. On board were the Palmer Squares, the Plainfield Revelers, the Suburban Squires, and a group of singing wives who, later that evening, made their first appearance as the Opposite Sextet. Sixty-five people made that barge trip, a maximum load for the boat. In the barge’s front hold was a huge supply of ice and beer. The party was well underway by the time it arrived at its destination. On the way, some enthusiasts, inspired by the canal water, had swum a length or two, others jumped in, some might have been nudged. The barge was anchored in an isolated grove, and hamburgers, hot dogs, grills, and charcoal were taken ashore for a cookout.

Hosted by the Suburban Squires, included the Squares, the Revelers and the Sextet back on the barge in a “return to the scene of our past triumphs!” One thing the Squires and Squares were known for was their showmanship. Their audience contact was a high point and indicative of their relaxed style. Opposite Sextet is official, and “Perfidia” returns.

Attending were the Squares, Squires, and Revelers, plus the Roaring Twenty, the rst mixed group at Spring Sing. We also had our rst mystery group—this time the Nassoons from Princeton University; their performance was a big success. During the afternoon, the big entertainment was a softball game played between the tenors (4) and the basses (7).

A buffet supper was provided, catered by the Opposite Sextet. It was also the rst chance for us all to see the Squires’ new red jackets. Wow! Another rst found NBC’s Monitor staff auditing our concert. The following week, excerpts from the program were broadcast and we were (at least we wanted to believe we were) national gures.

With the Revelers in charge, the site was Phillips Mill, north of New Hope. Returning were the Sextet, Squires, Squares, and the Roaring Twenty, plus two new groups, the Augmented Eight from Washington, and the Spare Parts from Hartford. The Augmented Eight has been a participant in Spring Sing ever since and

has brought enthusiasm, humor and a variety of music. The Spare Parts wowed everyone with their close harmony arrangements. In fact, they set a new standard of excellence for Spring Sing and opened our ears to what superb harmony could be. It was the begin- ning of the end for The Yale Song Book as a major resource for arrangements. Tommy Thomas and Ede astonished us with their yodeling in the courtyard, and Dick Barrett entertained on the guitar. One early guide-line, to avoid singing the same song in two Spring Sings, evolved at this time, as did the general agreement not to sing an arrangement introduced by another participating group. 1960 saw “uniforms” being adopted by each singing group; the result of those red jackets, no doubt.

1961 Roaring Twenty Andalusia, PA — The Barn The Roaring Twenty took over at the Barn in Andalusia, Pennsylvania. It was fun and the Squires, Squares, Sextet, Revelers, Augmented Eight, and Spare Parts all came back, but again some new faces appeared on the scene. The Clef Dwellers, an all-female group from Washington, became the second group to uphold the distaff side and did a super job. The Commuters (actually, the Commuters’ Singing Society of Lower Railroad Avenue!) wanted everyone to know that “the Squires and the Roaring Twenty aren’t the only groups in Philadelphia.” This year they started an attendance string that wasn’t interrupted for 15 years. At the Barn a new dimension was added. A two-record album was recorded and sold to all participants. We even had local Philadelphia disc jockey, Pat Landon, as MC. It seemed that Spring Sing had really arrived as an institution, and “Mack the Knife,” sung by the Squires, took the prize for the most fascinating song.

Andalusia, PA — The Barn The Commuters refused to let the music stop! They insisted on reviving Spring Sing at the Barn in Andalusia and invited the Squires, Squares, Sextet, Augmented Eight, Spare Parts, and the successors to the Roaring Twenty, the Counterparts. Oh, how we remember their skillful renditions of Swingle Singers tunes. For the first time, however, the Revelers did not appear. This was the first loss of a founding group. The Revelers disbanded for lack of first tenors. (It was ever thus.) The Sextet was on sabbatical. Spring Sing was back on the beam and was alive and kicking. But now we realized the importance of planning and gratefully acknowledged the efforts of the host group.

Alexandria, VA — Gadsby’s Tavern The Augmented Eight put on a fantastic show at Gadsby’s Tavern in Alexandria, a landmark in American history and a landmark for Spring Sing as well. Participating were the Clef Dwellers, who assisted the Augmented Eight with the arrangements, Squares, Squires, Spare Parts, Counterparts, and Commuters. Particularly memorable was the special female quartet called the Smoke Rings (also known as Fenno Heath’s harem—one member was his wife), who were mystery guests this year. We also  recall Wes Oler’s R-rated jokes and his Y sweater (for Yeshiva University), the party at Gadsby’s Tavern inside, and a wonderful afterglow outside, held later in the evening in the garden. The high brick walls produced reverberations—it was like singing in the bathroom.

A new plan began to evolve: the Spring Sing weekend. Many groups stayed over and discovered the joy of a late-night swimming party in the “closed” motel pool, as well as revival by means of a Bloody Mary on Sunday, and a Spring Sing reprise at the fascinating home of the Clark Cliffords.