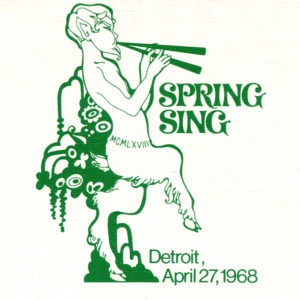 Since 1968, Spring Sing has selected individuals from time to time who have merited special recognition for their contributions to Spring Sing and the world of a cappella music. The selection of honorees occurs sporadically.

Primary selection criteria include prolific arranging, long-term directing, outside activities in the vocal music world, and personal involvement and support of Spring Sing. In some respects, the recipients are people who have been leaders and contributors to Spring Sing as an organization and supporters of all groups.

Their wholehearted encouragement of all singers is key. As a physical memento of each selection, Spring Sing has presented a Pan Award to these special people.

The original Pan Award was conceived by Frances Parcells (Charlie Parcells’s wife) of the Detroit Grunyons. She developed the original logo, and was herself given a plaque for her imagination and farsighted support of Spring Sing.

1968—Fran Parcells of the Grunyons and Wat Stewart of the Palmer Squares at the Players Club, Detroit.

1978—Wally Collins of the Grunyons and the New Wizard Oil Combination at the University of Colorado, Denver.

Dr. Walter Stowe Collins formed a singing group wherever he went! Following his graduation at Yale, where he was president of the Glee Club and “Popo” of the Whiffenpoofs, he organized the Auburn Octet at Auburn University, the Friars at Michigan (they gave rise to the Arbors), and the Old Oakland Buckets at Oakland University. It was inevitable he would start one at Boulder, especially with Yale colleague Ed Wolff there to help. Thus began the New Wizard Oil Combination, and what a contribution they’ve made to Spring Sing! Wally charmed us with his many unique solos (“The Sadder-But-Wiser Girl”), and stunning arrangements, but none so important as the one that has come to be the Spring Sing theme song, “I Found Love.”

1990—Johnny Newlands of the Spare Parts at Pocono Manor. 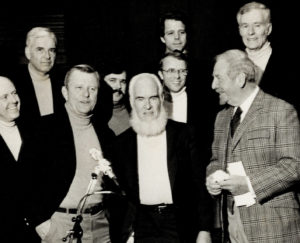 Johnny was founder and musical director of the Hartford-area “Spare Parts.” Johnny’s award was based on his monumental task of collecting and cataloguing all musical arrangements of all the groups participating in Spring Sing up to that time, working entirely from tape recordings. This collection was presented to the Library of Congress in Washington. In addition to the above, Johnny laboriously segregated and recorded Spring Sing programs for each participating group, furnishing the resulting tapes to the groups themselves. Johnny was also known to make a surprise appearance at another Spring Sing, impersonating the Ayatollah Khomeini ! Johnny was assisted in some of his recording work by his late brother, Jimmy.

1992—Wat Stewart of the Augmented 8 at Scanticon, Princeton.

Unquestionably the Father of Spring Sing. 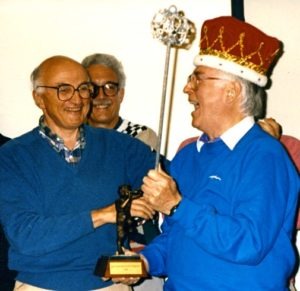 When Dick Sly and I formed the Palmer Squares in 1956, we soon decided to reach out to meet other singing groups. I invited my former group, the Revelers from Plainfield, New Jersey, to meet the Squares. Whip Buck’s brother, Jim, had a vibrant group in Philadelphia, the Suburban Squires, so we invited them to join us (the Revelers and the Squares) at a barge party on a canal boat in New Hope, Pennsylvania in May 1957. It turned out to be a combination picnic supper and singing party. Some of the Square’s wives had formed a women’s group, the Opposite Sextet, and they were invited to sing, too. It was a blast!

Wat was a lifelong member and number-one fan of the groups he was lucky enough to sing with: the Revelers, Palmer Squares, Grunyons, and Augmented Eight. Through Wat’s leadership and legacy, Spring Sing has continued to be a mutually supportive event, not a competition.

1997—Bill Gard of the Grunyons and Ed Wolff of the New Wizard Oil Combination as co-recipients at Greenfield Village. 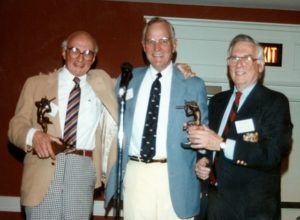 Here’s Bill Gard’s tribute to Ed Wolff: If there’s one person who could be called the father of the modern a cappella vocal jazz singing group, it would have to be Ed Wolff. Ed sent all of the arrangers at Yale back to their manuscripts (including Wally Collins, Bill Gard, and even Fenno Heath) to try to produce arrangements like his. When he became involved with Spring Sing, he brought his remarkable talent not only to the Wizards, but also to practically all the other Spring Sing groups. The Grunyons say they’ve never sung a Spring Sing program without at least one Ed Wolff arrangement in it. Ed has made an enormous contribution to what Spring Sing is today.

If there’s one person who could be called the father of the modern a cappella vocal jazz singing group, it would have to be Ed Wolff. —Bill Gard

Bill’s musicianship has been the group’s guiding light—what allows the Grunyons to master those complex and intricate passages in our favorite Gard or Wolff arrangements.—Tony Alcantara

2000—Roo Brown of the Witherspooners, the Private Parts, and Jersey Transit at Cape May.

Roo was celebrated with the Pan Award for her major involvement in a cappella music, and in Spring Sing. She founded, arranged for, and directed the Witherspooners (aka the Private Parts) a group that revolutionized the repertoire of Spring Sing. Roo has also arranged for many other Spring Sing groups, including the Augmented Eight and Jersey Transit. Roo Brown was the founding director of Jersey Transit, which will soon be celebrating its 20th anniversary. Roo helped to bring Jersey Transit to fruition in 1988. Roo appeared in the Off-Broadway production of “A, My Name is Alice.” Roo is currently living in Lewes, Delaware and conducting a singing group of enthusiastic seniors. Roo Brown continues to bring her creative genius, incredible voice-leading skills, and brilliant song choices to current Spring Sing groups. 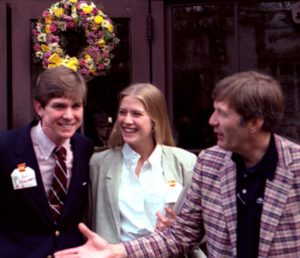 The back story: In 1982, Bill married Libby Geist, daughter of Woody and Rosemary Geist (of the Grunyons), the first of many Spring Sing inspired nuptials. In 1981, Woody announced their engagement during the Saturday performances in Alexander Hall at Princeton University and Wally Collins led the Spring Sing family in “I Found Love.”

When Bill stopped singing with the Augmented Eight in 1992, he established a Spring Sing administrative position to help manage the organization, but mostly to repay a debt of gratitude to all those who conceived and nurtured Spring Sing. In 2006, Bill became our first executive director as he helped guide Spring Sing to 501(c)(3) status as The American A Cappella Alliance. Spring Sing 51 (2008) in Washington was Bill’s 31st, and his last as executive director. The Pan Award was presented to Bill that year by the late Wat Stewart on stage at the Masonic Temple surrounded by the Augmented 8, Libby, and the AACA board.  Bill continues to support Spring Sing and AACA with various administrative functions including database and website management.