Dave Birkic passed away on August 1 at Connecticut Hospice in Branford. He was 77 years old, and a long-time Greenwich resident who recently retired to Old Lyme, CT. David was born to Mary and George Birkic in Cleveland, Ohio, on August 28,1940. He played the trumpet and football, sang in the chorus at Euclid High, and worked on his father’s construction sites. He graduated from Ohio State University where he majored in journalism. He came to New York to work in advertising and particularly enjoyed his time at Babcock & Wilcox handling business-to-business accounts. In the eighties he left advertising to become publisher of Profiles and Business Digest magazines in Greenwich, CT, and wrapped up his working life with a successful stint in Greenwich residential real estate.

Music filled his life from his childhood on, singing in church choirs, Greenwich Choral Society for 25 years, the Off-Sounders (Greenwich’s premier men’s acapella group) for nearly as long, performing under Phil McKnight’s direction in many Gilbert & Sullivan productions in Greenwich, and singing with the Westchester Opera. He designed and produced the Greenwich Choral Society’s elaborate performance programs for many years. He is survived by his wife, Tina, daughter Jennifer Allinson and grandson Caden Allinson of Westfield, IN, step children Geoffrey Marshall (and Michelle) of Needham, MA, and Leslie Cooper (and Joe) of Duxbury, MA, and seven grandchildren whose growing up he thoroughly enjoyed. They will all miss his good conversation and wacky humor. 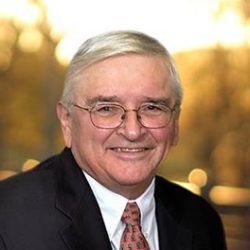