“James directed All Good Children from ’71 through ’74 including all four of our appearances at Spring Sing. His death is a big loss to academe and music—and to friendship.” —George Bassett, All Good Children & Cahoots

(Obituary taken from the Princeton Alumni Weekly. Class of 1968)

James died March 21, 2019, of pancreatic cancer at home in Brattleboro, Vt., surrounded by family. He was 71. With his passing, the class lost one of its true Renaissance men.

Born July 31, 1947, in Charlotte, N.C., he grew up in Alabama and Kentucky. At Princeton he majored in English, was a flutist in the orchestra, sang in the Footnotes, and ate at Cloister. After a stint in the Army as a principal flutist with the 50th Army Band, he earned a doctorate in English from Yale in 1974, where he taught for nine years. He joined Michigan’s faculty in 1983 and moved to Boston University in 1998, chairing the English department and retiring in 2017.

James was not only a scholar of 18th-century literature, having written a seminal biography, John Dryden and his World, but also an accomplished flutist, recording several CDs — none of us will forget his wonderful performances at our 45th and 50th reunion memorial services.

He was also an author and authority on poetry, having written The Poetry of Warin 2009, as well as being fluent in French, German, Latin, and Greek. A former faculty colleague perhaps best described Jim: “He was spectacular … frighteningly articulate and upbeat and well-organized and well-read and filled with unflagging energy. It kind of left many of us in awe, frankly.”

(taken from the Princeton Alumni Weekly) 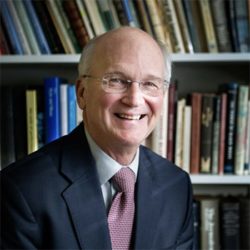