Mary Elizabeth Pitcher Stewart of Kensington, Maryland, died on January 5, 2019, at the age of 95.  She was born in Albany, NY, on December 13, 1923, to Mabel Tynan Pitcher and Ralph Morgan Pitcher. Later the family moved to Buffalo where Mary attended the School of Practice and graduated from The Park School.  She went to Bradford Junior College, earning an associates degree in 1943. During WWII she worked as a hostess at the Hotel Delmonico and as a secretary at American Airlines New York office.  After hours there were certainly hijinks. 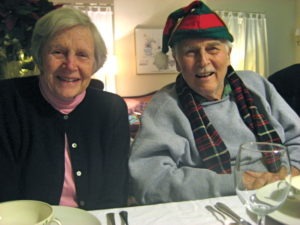 Mary married William Watson “Wat” Stewart on December 16, 1944, and after the war joined him in Italy, traveling on an ocean liner, one of the first women to appear among the troops!  They lived outside Venice during the occupation and later traveled by jeep over the Alps to board a liner for New York.

Wat and Mary raised Sally, Dave, Betsy, and John as they moved with his work from Plainfield, NJ, to Princeton, NJ, to Bloomfield Hills, and Birmingham MI, and finally to Bethesda, MD in 1971. In Bethesda, after seeing her youngest go off to college, Mary went to work at the Smithsonian Institution’s Division of Performing Arts, work she loved for many years.  For four summers beginning in 1974, she worked at Family Traditions tent at the Folk Life Festival on Washington’s Mall.

She loved spending parts of the summers in Brooklin, Maine, with dear old friends especially the Dick and Riggy Sly family— singing, playing tennis, and going on boat picnics.

She and Wat loved to sing together.  They had a set of Moon songs – Mister Moon, Only a Paper Moon,  Moon Moon Shining Up Above Her. Another special favorite was Washing Dishes with my Sweetie.  Mary adjusted to car camping especially well. Cooking on the Coleman stove, making endless bologna and cheese sandwiches, and even producing a cake.

Wat died in 2011, one month after celebrating their 66th anniversary.  Mary and Wat are survived by their children: Sally (Steve) Gilbert, David Stewart, Betsy Stewart, and John Stewart; three grandchildren, Nate, Josh, and Kathrin; two great-grandsons, Will and Isaac; her sister, Sally Sword; two nieces, a nephew.  Sadly her oldest nephew is no longer with us. She is also survived by many unrelated friends who are part of her extended family.

She was a lover of music, a patient knitter, an eloquent listener, a skilled questioner, and an archivist of not only her own family’s history but also Wat’s.   Above all, she was a gentle, principled and kind person. 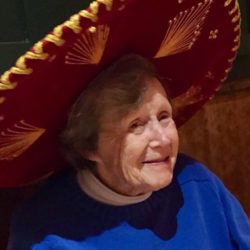